Should My Child Take The IB? A Look At IB And Standards In SG 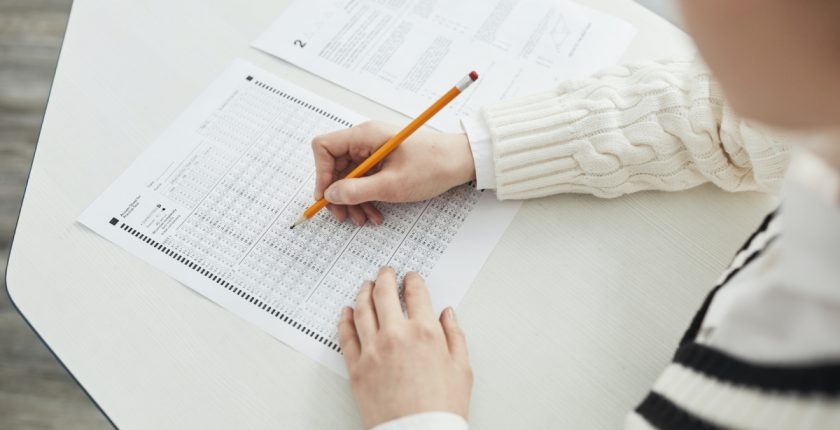 To take A Levels or IB, that is the question. You may need to make that decision earlier than you expect – especially if you are considering (or have applied) to IP schools that offer either programme. While the A Levels might seem like the more ‘default’ choice in Singapore, IB has also picked up steam over the years. 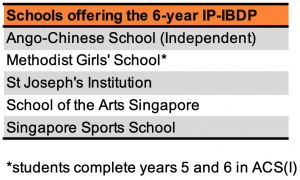 So, why should you be looking at the IB? Is it worth considering, instead of the A Levels? Here’s a quick introduction to the IB system in Singapore – and why you might want to choose it over A Levels.

Right off the bat, IB has a strong reputation for being a very ‘international’ programme. The name itself says International Baccalaureate, and the heart of its programme is to cultivate international-minded young people who can contribute to the world.

It is also ‘international’ in another way: The diploma is widely recognised worldwide, including top institutions in the US and UK, like Harvard, Cambridge, and Oxford. So, students who are gunning for a place in university won’t have to worry about using their IB grades to apply.

Closer to the actual experience of studying the IB, many also embrace IB because of the breadth that it offers. It requires students to take subjects across a diverse range of disciplines, including research writing in the EE and developing non-academic skills through CAS. Through these, it prepares students well for the independent learning and academic rigour that is commonly expected of students in universities.

On a more practical sense, there is also an observation that the criteria for entering university with IB scores is more ‘lenient’ than using A Level scores. To highlight an example, A Level applicants to medical school are expected to have straight As. Even the lowest 10th percentile of successful applicants have straight As.

However, there is anecdotal evidence that applicants with IB scores of 39 or 40 have managed to clinch spots in Medical school, although the perfect score is 45. Of course, these applicants probably had very good portfolios and personal statements to back up their applications – but it doesn’t discount the fact that there seems to be a larger wiggle room for IB applicants. 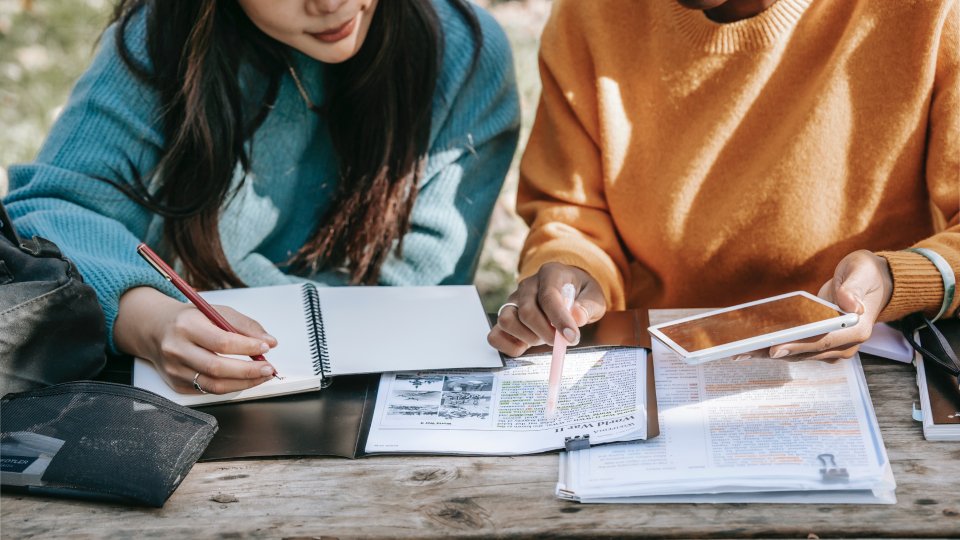 Although IB is less popular than the A Levels in Singapore, it nonetheless carries with it the hallmark educational quality that Singapore is known for. In fact, IB scores from students in Singapore (including locals and international students) have consistently outperformed the global average.

From last year’s November IB exams, Singapore produced 55 out of the world’s only 99 perfect scorers – that’s more than half of them! Across the board, 97.73% of students in Singapore passed the exams, which is significantly higher than the worldwide average of 76.68% (source).

Comparing the average scores, Singapore also edged out its competitors with a mean score of 38.35, against the world’s 29.81 and the Asia-Pacific region’s 34.83.

And if you think this was an exception rather than the norm, just take a look at 2019’s global IB schools ranking. Out of 27 schools offering the IB in Singapore, 5 made it to the top 30 list in the world (source). Bear in mind that we are competing with the vast options of schools in larger nations like US and UK, some of which are super-selective, small, specialised schools (20-50 cohort size) which only allow their top-performers to sit the IB exams. In contrast, Singapore’s schools like ACS (Independent) and SJI have larger cohorts (100-400 cohort size) coming from the general population in Singapore. 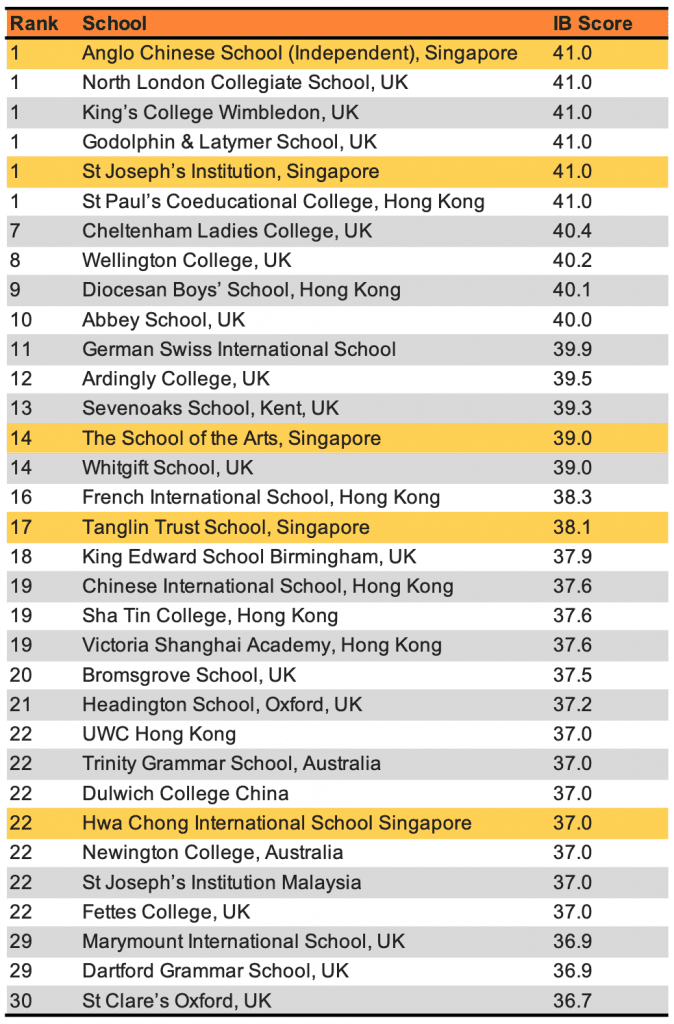 ACS(I) and SJI graces the very top spot with an average score of 41, tied with several other schools from UK and Hong Kong, while SOTA and Tanglin Trust School comes in at 14th and 17th place respectively. Finally, Hwa Chong International sits at the 22nd spot, with a very respectable score of 37.0.

The IB diploma curriculum is quite different from the A Level curriculum, in terms of the number of subjects taken and grading system.

In IB, students can take core subjects at two levels: Higher level (HL) or standard level (SL). This roughly corresponds to H2 and H1 at A Levels, where HL is covered more in depth with more curriculum time, and SL is less academically rigorous.

The minimum subject load for an IB student is 3 HL and 3 SL subjects, although some students do choose to take 4 HL subjects. Of the minimum 6 subjects, these need to include 1 subject from each category:

TOK: A course which looks at the basis of knowledge. Assessment includes a 1600-word essay and oral defense section.

EE: Coursework which involves writing a 4000-word research paper on a topic of one’s choice.

The IB diploma is assessed based on a combination of coursework and final exams. Each core subject is graded out of a total of 7 points, with 4 as the passing mark. For TOK, EE, and CAS, a matrix system is used to award up to 3 additional points in total.

Some students may choose to take up to 4 HL subjects, but only the highest 3 scores will be considered in the final tally.

The passing mark for attaining the IB diploma is 24 out of 45.

Should your child take the IB?

The choice is ultimately yours to make, as both A Levels and the IB have their own pros and cons. If more breadth, independent learning, and an international perspective is important to you for your child’s education, the IB route is one worth considering. Standards-wise, there is no need to worry as Singapore’s education system is well-equipped to nurture your teen no matter which path they choose.

Some parents may be especially worried because of the lack of support for IB students due to the smaller numbers taking it in Singapore. For that, we are here to help! Although we are well-known for classes like JC Physics tuition, we also welcome IB students and have classes such as IP Math Tuition for students doing IB. For more guidance on doing IB in Singapore or how to apply, we also welcome you to enquire with our educational consultants.

Don’t Get Stumped By These Common DSA Interview Questions
Information ,

List Of Affiliated Primary And Secondary Schools In SG (2022)
Information ,