Common Sentence Structure Mistakes & How To Correct Them 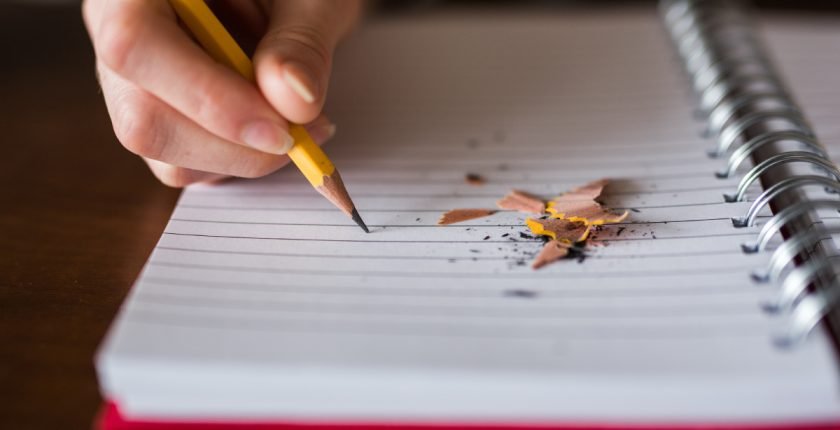 Good grammar and sentence structure are necessary for good writing and speaking. You can have an amazing storyline for your composition but terrible language will result in a composition that is difficult to understand, with a poor language score.

Excelling at English isn’t just about knowing a lot of words. Knowing how to form these words together into meaningful and effective sentences is also crucial!

That’s why many people find it helpful to have an English tutor to help them. Your tutor can spot your mistakes and help you correct them, making it easier to identify your common mistakes. If you’re looking for a tutor, you’re in the right place, because we have primary school English tutors and IP English tuition classes for you to choose from.

And meanwhile, here are some of the common sentence structure mistakes of students in Singapore. How many of these mistakes have you been making?! 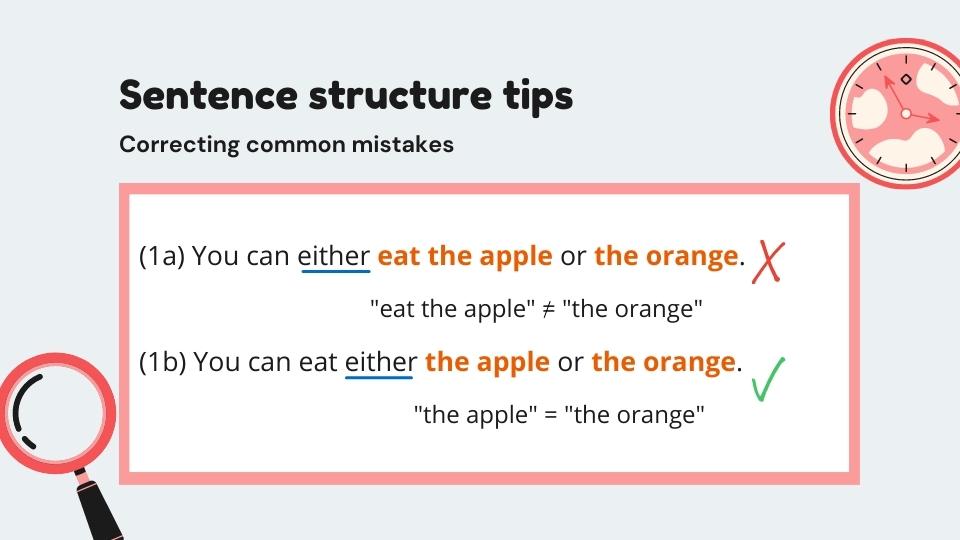 ‘Either, … or’ constructions are used to indicate two alternatives. Many students have trouble with where to place the word ‘either’.

(1a) You can either eat the apple or the orange.

(1b) You can eat either the apple or the orange.

(1b) is the preferred structure, while (1a) is not ideal. The key is that both sides have to be balanced. For example, both need to be noun phrases, or both need to be verb phrases.

Here’s what we mean. Look at the options after the word ‘either’:

(1a) You can either eat the apple or the orange. (bad)

(1b) You can eat either the apple or the orange. (good)

Thus, (1b) is a better parallel and better way of structuring the sentence.

Here is another pair of examples. Can you figure out and explain which one is the correct structure?

(a) Either Jane’s wallet is stolen or lost.

(b) Jane’s wallet is either stolen or lost. 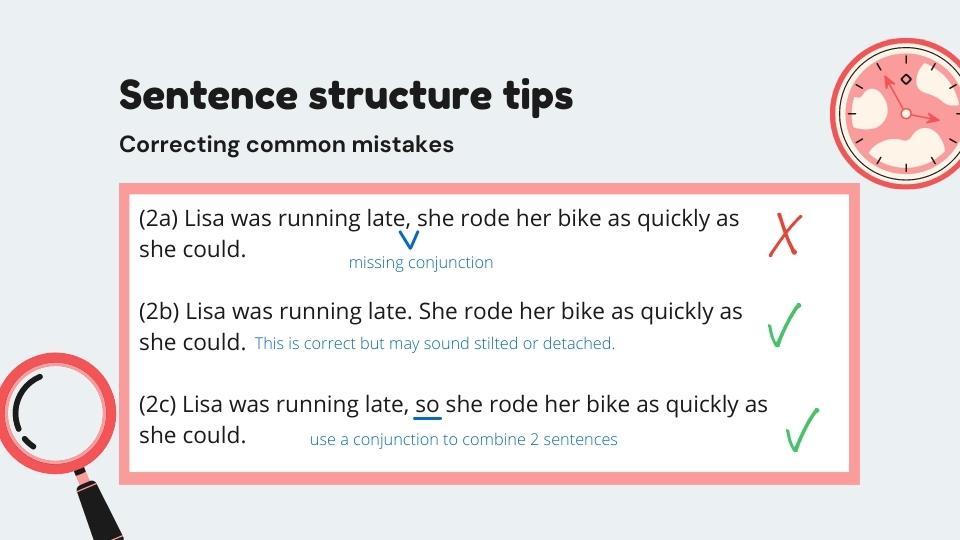 Students may try to connect sentences together to form longer and more ‘sophisticated’ sentences. However, without the correct punctuation or conjunctions, these become run-on sentences, which is ungrammatical.

(2a) Lisa was running late, she rode her bike as quickly as she could.

Notice how you can actually split the above into two separate sentences?

(2b) Lisa was running late. She rode her bike as quickly as she could.

To connect these two sentences, you need a connector to ‘glue’ them. In this case, the second sentence describes a consequence of the first sentence. Hence, we can use the connector ‘so’:

(2c) Lisa was running late, so she rode her bike as quickly as she could.

(2d) As Lisa was running late, she rode her bike as quickly as she could.

Here is another pair of examples. Try to explain which one is the better construction. Can you come up with another way to phrase it?

(a) I was afraid of the bees, I screamed at the top of my lungs.

(b) I was afraid of the bees, so I screamed at the top of my lungs. 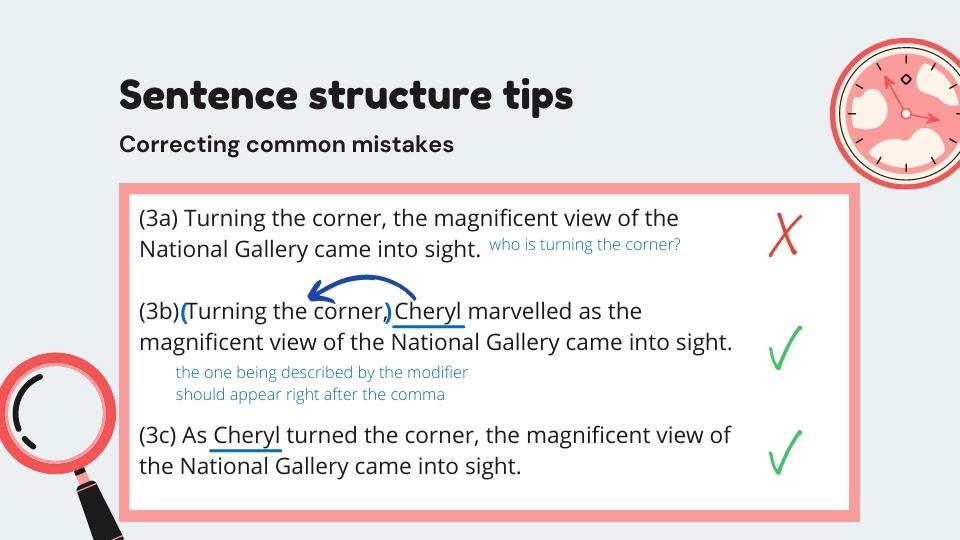 What is wrong with the below sentences?

(3a) Turning the corner, the magnificent view of the National Gallery came into sight.

The sentence is ambiguous, meaning that the meaning is unclear, or there may be multiple meanings associated with it. This is a common issue when a modifier phrase, also known as a ‘dangling modifier’ (in this case, ‘Turning the corner’) is used.

In (3a), who is turning the corner? In such sentences, it is good practice to follow the modifying clause with the person/animal/object that is doing the action.

(3b) Turning the corner, Cheryl marvelled as the magnificent view of the National Gallery came into sight.

Alternatively, you can introduce the person doing the action in the beginning, for example:

(3c) As Cheryl turned the corner, the magnificent view of the National Gallery came into sight.

Here is another pair of examples to test how well you can identify and correct dangling modifiers:

(a) Failing to finish revision in time, the results turned out badly.

(b) Failing to finish revision in time, Jackson did badly on the exam. 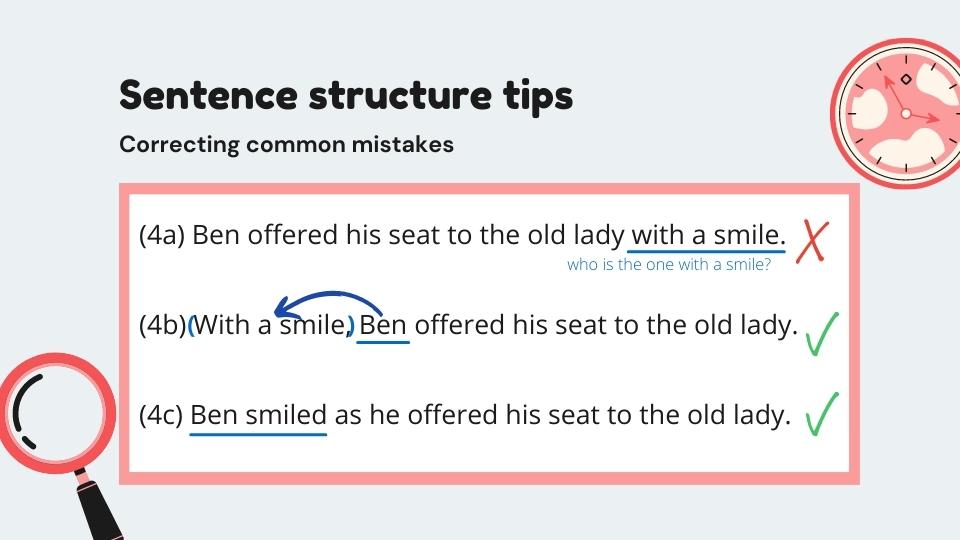 Using modifier clauses are not the only way to create vague sentences. Students need to beware of other ambiguous sentence constructions! Some of them may be grammatically sound, but the meanings can be very misleading, making the writing seem clumsy and difficult to understand.

Try to figure out what this means:

(4a) Ben offered his seat to the old lady with a smile.

The question is: Who was the one ‘with a smile’? Ben, or the old lady?

This is a very common ‘mistake’ that can lead to hilarious (or awkward!) results when taken the wrong way. To make things clearer, you can re-arrange the sentence. For example:

(4b) With a smile, Ben offered his seat to the old lady.

(4c) Ben smiled as he offered his seat to the old lady.

How to improve sentence structure?

Most students are able to pick up sentence structure naturally if they are exposed to the language very often. Thus, making it a point to read and listen to good English examples is essential.

We say good English examples, because there are also plenty of reading and audio material in English, but they aren’t very beneficial. That may be due to overly simplistic language (e.g. a P6 student reading kindergarten level books), language that contains slang and informal usage, or just plain, poorly written language.

You can check out book reviews to look for great reading recommendations for your child. Established news channels and websites like The Straits Times, Channel News Asia, and TodayOnline are also usually quite good sources of language examples.

That said, English is still a very tricky language to learn, with plenty of exceptions and iffy rules. We don’t blame you for making these mistakes! What’s important, however, is learning from these errors as you go along.

When it comes to this, having a tutor to point out these mistakes and explain them to you is by far the best and quickest way to learn. A tutor can spot mistakes that you wouldn’t realise you made, saving you lots of time and headache!

We have primary, secondary, and IP English tutors who are dedicated and passionate word whizzes who are not just experts in English, but also skilled at training students to write better essays, be it in English, Language Arts, Literature, or GP. So, don’t struggle alone – get in touch and let our tutors help you excel in English!

Why Everyone Should Consider Going For Post-Exam Tuition
Information , Thoughts on Education ,

Tips You Can Use Now For Scoring Better in Physics Exams
Information , Study Materials ,